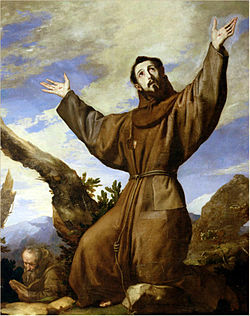 During this year’s Europe tour Sadhu Maharaja repeatedly spoke about Francis of Assisi. Though he was never ordained to the Catholic priesthood, Francis is one of the most venerated religious figures in history.

Raising his arms to the sky on the painting to the right Francis looks a bit similar to Caitanya Mahaprabhu, doesn’t he?

Those of you who’ve met Maharaja before know that he often speaks about Jesus explaining that Jesus was not a religious, but a spiritual person.

Religion is about rituals and a materially motivated approach to god consciousness. Real spirituality, though, is about prema, transcendental love of god that is free from the three modes of material nature.

In the following video Maharaja speaks to a Franciscan monk and other devotees in Assisi.